Elephant in the room? What elephant? 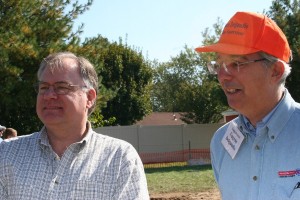 The all-Republican Loudoun Board of Supervisors, which bows to no one when it comes to ethics, at last had something to say about fellow supervisor Eugene Delgaudio’s repeatedly proven peccadillos.

As we recall, it has been a mere 16 months since two of Delgaudio’s aides told Chairman Scott York (R) about Delgaudio’s misuse of office for personal gain and provided solid documentary evidence of the same, nine months since the Washington Post broke the story after York did his best to squelch the evidence, eight months since the Board abruptly canceled its own hastily-ordered “investigation” of the matter, and two full weeks since the special grand jury investigating Delgaudio issued an almost unprecedented report concluding that Delgaudio committed a “direct violation” the county’s code of conduct, repeatedly used his county-paid staff to engage in political fundraising which would have been an indictable felony but for a bizarre loophole in Virginia law that exempts county supervisors, and quite probably accepted large unreported cash campaign contributions.

So after months of saying nothing the Board finally spoke! The occasion was the very end of the Board’s July 3 business meeting; vice chairman Shawn Williams (R-Broad Run), with rich humor and originality, brought the subject up by referring to “the elephant in the room.”

They all then proceeded to make sanctimonious speeches in which they referred to everything but elephants:

• Ralph Buona (R-Ashburn) asserted that the Board had already taken decisive action on the matter last fall, when it passed a very stern resolution stating that henceforth staff aides cannot be also employed by their own supervisors’ outside political campaigns

• Matt Letourneau (R-Dulles) said he was very surprised to learn that ethics laws do not apply to supervisors, and suggested someone else, like the General Assembly, ought to fix that problem

Somehow, not one managed to say that what Delgaudio did was wrong, nor did any mention that embarrassing little fact that the Board itself refused to renew the ethics policy of its predecessors, which would require supervisors to recuse themselves from votes that directly affect the interests of campaign contributors (York declared back in January 2012 that such a policy was “unnecessary,” “all about show,” and “unenforceable”, which appears to be another way of saying “inconvenient,” as it would have required him and almost every other member of the all-GOP Board to sit out votes they have since cast favoring the Loudoun Hounds and other big donors. Delgaudio himself memorably asserted that an ethics policy was a “ploy by pretentious liberals”). The argument several other supervisors made at their first meeting back in January 2012 was that they had no need for an ethics policy since their actions were already governed by state law.

Well, we saw how that worked out!

Nor did anyone mention that last year York shrugged off Delgaudio’s violations of county policy in abusing his staff and creating a hostile work environment on the grounds that supervisors’ staff aides have no protection under county employee policies.

So . . . two steps the Board could take right now! Adopt a real ethics policy of its own (no need to wait for the General Assembly to fix the problem, Supervisor Letourneau!) and make supervisors’ aides employees subject to the law and with the same rights and protections and responsibilities as other public employees. The worst problem the whole sordid business revealed was that at present, if a supervisor tells his aides to break the law (oh, say, by spending all of their time raising money for the supervisors’ own outside business or political campaign), he or she has no recourse. Go to HR, and you get fired (as happened to Delgaudio’s aide who complained). Go to the  chairman of the board, and he, a politician, ties to bury the whole matter. Go to the prosecutor, and it gets dismissed because state law against corruption applies only to “full-time” government employees, not our li’l ol’ county supervisors.

Delgaudio himself reliably ended the meeting with his usual comic relief and firm grasp of reality by declaring that he does, so, serve his constituents (even though the grand jury reported that he reprimanded his aides whenever they spent any time answering constituents’ inquiries or phone calls rather than hitting up campaign donors): “My routine for every day,” Delgaudio said, “is I visit a minimum of 300 to 500 houses every day. I deliver a newsletter to each of these houses.”

That’s quite a routine. At say two minutes per house, that means Eugene is out there 10 to 16 hours a day, “every day,” “visiting houses.” Busy man! He must barely have time to run his million-dollar-a-year anti-gay hate group during the day, much less get back to his home in Fairfax County each night.