Who needs museums when you have the Redskins, sort of 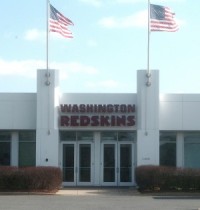 The deal, it was explained, will ensure that the Redskins keep their corporate HQ in Loudoun for at least a few more years. Supervisor Shawn Williams (R-Broad Run), a big fan, could hardly contain his excitement about what a coup this was for Loudoun . . . even though, just a minor detail, the team will still be abandoning its training camp in Loudoun next year. But Williams explained that the move of the training camp to Richmond was being made “for football related reasons” and, after all, who are we to question “football related reasons”: it’s not as if handing over a mere $2 million in free money to a large for-profit company entitles us to be that presumptuous.

The money by the way comes from the Transit and Occupancy Tax, and is required by state law to be spent “solely for tourism and travel, marketing of tourism, or initiatives” that increase overnight visitors staying in hotels and motels.

Yes, I’m sure the crowds will just be pouring into Loudoun and the Broad Run district to have their pictures taken in front of the Redskins corporate headquarters!

Meanwhile, the Board as we fondly recall during the spring budget process eliminated (saying these were not “core functions of government”) $100,000 for the Urban Horiculture program, $250,000 for the Loudoun Drug Court, and a series of small grants of a few thousand dollars each to a whole list of community cultural, service, and arts organizations. A few thousand dollars to many of these organizations is the difference between life and death; they rely almost entirely on volunteers and the small amount of government funding covers their essential overhead costs. (It’s not as if we’re talking about something really trivial like, say, $2 million to an organization with a gross revenue of $350 million.)

Now the Board is once again showing how hard headed and businesslike they are, with a move to eliminate all county funding for the Loudoun Museum in downtown Leesburg. The museum currently receives $63,000 a year from the county to help cover the costs of operations and a single full-time paid staff person. Voting in the Board’s Finance Committee to eliminate funding altogether, hard-headed businesslike supervisor Ken “Ken” Reid (R-Leesburg) declared, “I think it’s very clear when you look at the financial statements that the museum doesn’t have a market.”

Of course, part of the museum’s difficulties is that its funding from the county has already been cut 80% in the last few years, forcing it to curtail hours. That tends to hurt the “market” a bit.

Among the museum’s collections are documents signed by George Washington and James Monroe; very rare letters written by freed slaves; and furniture, textiles, and other artifacts.

A final vote by the full board is scheduled for tomorrow.

This Board has however consistently showed that it has little to no interest in supporting anything that might put a value on Loudoun’s history, scenic beauty, rural economy, farmland . . . in other words, anything that just might suggest there might ever be another use  or value for the county besides providing a substrate for more big box stores, electronic signboards, and commercial strip malls, which this Board — not to mention its major campaign contributors  — is exceptionally fond of.