Not content with merely using his $1 million campaign war chest to send daily dishonest glossy hit piece mailers attacking his Democratic opponent, the GOP’s tea party wacko state delegate candidate Dave LaRock has apparently decided that the best way to get out the right wing wacko vote is with a vulgar, misogynist, and sexually crude attack on Democrat Mary Daniel via social media. As Loudoun Progress reports, LaRock’s designated social media man in Purcellville posted a stunningly offensive comment (parental discretion advised) about Daniel supposedly as a way to link her to the reviled Obamacare.

For a guy who’s been prevaricating to the press with impunity, unleashing a veritable mudslide of false and negative campaign literature about his Democratic opponent Mary Daniel, and flaying alive any fellow Republicans who not agree with 100% of his Tea Party extremist ideology, GOP state delegate candidate Dave LaRock is very sensitive guy.

He told the Loudoun Times-Mirror this week that it is “very insensitive” for his opponents to even mention his positions on social issues, which he called “a ploy” and “a campaign tactic.” END_OF_DOCUMENT_TOKEN_TO_BE_REPLACED

LaRock’s wacko views on the Constitution

In true Karl Rove spirit, LaRock kicked off his negative onslaught with the fabricated accusation that his opponent, Mary Daniel, was doing what he himself was about to do (“Why is Mary Daniel running a gutter campaign?”). That might have been just ever so slightly more convincing had LaRock offer a single instance of Daniel’s supposedly “dirty” campaign. But never mind: the purpose was simply to provide cover for his own dirty tricks.

As noted last week, LaRock has also been assiduously ducking any and all candidate forums or debates, including one sponsored by the Loudoun Chamber of Commerce (LaRock was the only candidate from either party in any of the several local delegate races not to show). And his campaign issued a patently false excuse for his blowing off a forum sponsored by the Purcellville Gazette, blaming the Gazette for refusing to accommodate his schedule, when in fact LaRock told the paper that he had no free dates whatsoever and that he “maybe” would attend “schedule permitting” but that he would decide whether to participate on the basis of “cost-benefit analysis.” (How’s that for bringing businesslike values to public service.)

For the general election, LaRock has been trying to reposition himself as a centrist pro-business candidate (though studiously avoiding mentioning in any of his literature just what his own “successful small business” is: namely, a two-bit, confrontational developer of crappy McMansions, not something that would stand him in very good stead with the Loudoun electorate which is already fed up with the influence of developer money in local politics).

Yet lest their be any doubts about what a wacko Tea Party fringe candidate LaRock indeed is, all one need do is consult the website of the “1789 Project,” of which LaRock is president. END_OF_DOCUMENT_TOKEN_TO_BE_REPLACED 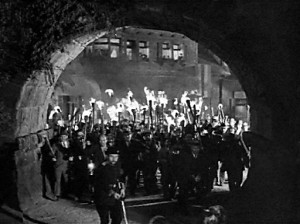 It’s always a good measure of a politician’s mettle how he reacts to criticism. On that score, our all-Republican Loudoun Board of Supervisors ranks somewhere between “irate” and “petulant,” what with Chairman Scott York’s regular anger-management lapses (one of which was of enduring benefit to realloudoun, boosting our readership by a factor of 5 after the chairman lambasted this blog from the dais for having committed the unheard of act of taking issue with an elected official’s wisdom) and Supervisor Eugene Delgaudio’s practice of lashing out at liberals, homosexuals, Democrats, and “the media” for all of his own ethical and financial lapses and sending mocking e-mails to fellow Tea Party members (including his close personal friend and loyal supporter, GOP state delegate candidate Dave LaRock) deriding citizens who offer even the mildest constructive suggestions for the future of their county.

Dave LaRock, the right wing wacko Tea Party GOP nominee for the 33rd Virginia House district, has been trying very hard to present himself as a man of the people.

The only trouble is that he seems scared to death of actually encountering any people.

He failed to show up a candidate forum in Berryville; then he declined to respond to a questionnaire from that bastion of left wing radical activism the Loudoun County Chamber of Commerce, which was a prerequisite for participation in the Chamber’s candidate forum; and he has told the Purcellville Gazette, which is sponsoring a candidates’ forum tonight at which Democrat Mary Daniel and Libertarian what’s his face have agreed to appear, that he has to wash his hair or clip his toenails or something and may be too busy to attend (the newspaper reports, “The LaRock campaign said it might attend, schedule permitting”).

Dave, come out from behind that inflatable pig and answer the voters’ questions!