Mike Farris and the Lyme Disease quacks behind Loudoun’s “Initiative”

If you were puzzled as I was why the Loudoun Republican Party suddenly decided that it was up to them to save us from Lyme Disease, it turns out that the answer is in our own backyard: the moving force behind this odd business is none other than home-schooling and creationism-advocate (and politically well-connected Republican lawyer) Michael Farris, head of the unaccredited Bible college he founded in Purcellville for like-minded home-schooled Christians, Patrick Henry “College.” 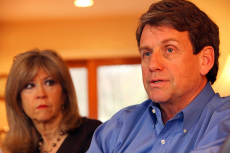 Farris was leading the charge at last week’s Board of Supervisors’ session in which it voted to proceed with a “10 Point Lyme Disease Action Plan” for Loudoun County.

It was a strange move on many fronts. For one thing, the Board’s contention that Lyme Disease is a “neglected” issue and that Loudoun needs to launch its own public education effort was remarkably naive, not to say simply weird. The Centers for Disease Control, with thousands of public health and epidemiology experts and a multi-million dollar budget, has been doing that work for decades. CDC scientists were the first to discover the cause of Lyme Disease and its means of transmission—a spirochete bacterium carried by mice and deer—and have been working assiduously to alert the public on the simple steps they can take to protect themselves.

As the CDC emphasizes on its very informative website, Lyme Disease is above all not something to panic about.

It is not fatal; it is not easily transmitted; there is no need to avoid outdoor activities. Using an insect repellent with DEET is extremely effective in averting tick bites in the first place; removing a tick within 36–48 hours even if you are bitten completely prevents transmission of the disease-causing bacterium. And even the small number of people who actually are infected—only about 1 in 10,000 people even in high-Lyme areas—are almost always completely and quickly cured of the infection by taking a common oral antibiotic such as amoxycillin or doxycycline, for 14 days.

If the disease is left untreated, it can cause serious joint and neurological problems; but as extensive medical studies have established beyond doubt, even late-stage Lyme Disease is quickly cured by at most 28 days of antibiotic treatment, and those patients experience prompt and thorough recovery.

A small number of patients, however, enabled by irresponsible doctors promoting unproven and even dangerous treatments, have claimed that they suffer from “chronic Lyme Disease,” and that the only relief they can obtain from these ongoing chronic complaints is from prolonged—years-long in many cases—intravenous antibiotics.

As the CDC emphasizes, clinical trials have completely disproved this. The bacteria are completely absent once the initial 14-day or 28-day treatment is completed: studies in “chronic” Lyme sufferers have shown the bacteria are absent, period. There is no infection left to treat.

As the CDC unequivocally states, there is in fact no such thing as “chronic” Lyme Disease: It does not exist for the simple reason that it is impossible, literally impossible, for prolonged antibiotic treatment to have any effect on a disease that is absent.

Still, there was such clamor from patient advocates that the CDC carried out several careful extensive clinical trials of long term antibiotics in patients claiming to be suffering from “chronic” Lyme disease: the studies found absolutely no difference in outcome between patients receiving long-term IV antibiotics and patients receiving a placebo.

Sadly but unsurprisingly, these scientific facts have not stopped this subset of patients from loudly pressing their claim that they are victims of a chronic unrecognized disease—and of a conspiracy by the medical “establishment” to deny their suffering.

And our own Mike Farris, it turns out, is one of the loudest of these clamoring claimants. He convinced fellow-Republican Governor Bob McDonnell to name him to head a statewide Lyme Disease Task Force—a curious appointment for someone who not only has zero medical or scientific qualifications but who has made an actual career of denying and denouncing the most fundamental fact of modern biology—and now Farris has apparently convinced his fellow Republicans on the Loudoun Board of Supervisors to establish its own such “Lyme Disease Commission” and launch its own local “Lyme Disease Action Plan.”

In fact, what Farris has been using his statewide bully pulpit to do is to relentless promote this narrow, singleminded, quack-medicine, fringe notion about “chronic” Lyme Disease. Farris claims that his wife is a chronic Lyme sufferer as are all his seven children; he told the Roanoke Times newspaper that his wife got a tick bite two decades ago, which was ultimately “traced” as the “cause” of her recurring bladder pain, which is now being “treated” with IV antibiotics, a treatment which she asserts is the only effective relief for her pain.

Worst of all is this astonishing fact uncovered by the Roanoke Times, which I will simply quote and let speak for itself:

Vickie Farris and 22-year-old Michael Jr. have sought treatment by a well-known Lyme doctor, Dr. Joseph Jemsek, who moved his practice to Washington, D.C., after losing his medical license in North Carolina for treating patients with long-term antibiotics.

One of the worst things, indeed, in the Loudoun Board’s 10-Point “Action Plan” is item 7, to “Establish a list of doctors who specialize in the diagnosis and treatment of Lyme disease and provide this information on the County’s Lyme webpage in addition to any new educational materials.”

In fact, the only doctors who claim to have some “special” expertise are the ones who have made a practice of advocating these ineffective and dangerous treatments for the non-existent condition of “chronic” Lyme Disease. The actual treatment and diagnosis of actual Lyme Disease is something routinely in the competence of any general practice physician.

Let’s be clear: there are certainly people who suffer from chronic pain, for many reasons. But the science is unequivocal: whatever they are suffering from, they are not suffering from “chronic” Lyme Disease, since that ailment does not exist. A certain proportion of people with chronic conditions—joint aches, headaches, insomnia, whatever—also will happen to have been exposed to the Lyme Disease bacterium at one point or another, however, which allows irresponsible doctors and credulous patients desperately seeking an explanation for their problems to put 2 and 2 together and get 4,389. Responsible doctors treat diseases that are real. Anyone who has had Lyme Disease has been completely cured of Lyme Disease after 2 to 4 weeks of antibiotics. After that, symptoms have to be indicators of something else.

The real problem is that these patient advocates and their quack-doctor enablers have latched on to Lyme as a panacea explanation for a whole laundry list of ills and pains, many of which are vague, nonspecific, and for that matter universal to the human condition. Their suffering is not “in their head”—it is real to them—but neither can it possibly be the result of Lyme Disease.

What our Board of Supervisors has sadly done is ignore scientific expertise and allow themselves to be hijacked by a fringe group of unscientific advocates, who actually are doing terrible harm. They are misleading patients; they are spreading unnecessary panic about Lyme disease in general; they are pushing ineffectual solutions to the actual problems and dangerous solutions to the chronic ails that this small subset of patients are suffering from. (Long-term antibiotic treatment carries significant risks, by the way—and indeed can exacerbate bladder infections, gastrointestinal problems, and other serious ailments that these very patients complain of. Long-term IV antibiotics are not innocuous or safe; some of these inappropriate treatments have been fatal.)

There is in fact an element of panic and counterproductive advice that runs through the Loudoun Board’s draft “Action Plan” that directly mirrors Farris’s fringe crusade to make people believe that Lyme Disease is a chronic and incurable condition. Farris and his followers have been traveling the state saying things like “we’re living in fear of walking on the grass” (as one woman told the Loudoun Board last week), or Farris’s own hysterical advice: “We should be telling our soccer teams, ‘Don’t chase your ball into the woods.'”

Farris also speaks of an “epidemic” of Lyme in Loudoun and Virginia. Yet it’s worth keeping in mind that other states have learned to cope with far higher incidence rates than Virginia’s. Delaware has an incidence rate 7 times that of Virginia; New Hampshire 6 times; Wisconsin 4 times. You would never know from all of this panic-stricken talk from Farris & co. that 99.99% of Virginians have never gotten Lyme Disease, or that 90%+ of those who have gotten it were promptly and completely cured before they even had any damaging symptoms appear, by a short and appropriate antibiotic treatment.

Farris also has been whipping up hysteria over deer and proudly telling how many he has been shooting in his own yard; Supervisor Janet Clark, from Farris’s district in Purcellville, chimed in with this idea herself last week in her newsletter, urging that deer hunting in densely settled areas of Loudoun be initiated.

In fact, the best scientific research has firmly established that human infection rates do not significantly track deer populations; mice and other rodents are the vectors responsible for transmitting the Lyme bacteria to ticks (deer do not transmit the bacteria, only harbor the ticks) and thus rodent populations are the real determinant in transmission rates; and indeed when deer populations fall, the ticks readily find alternative intermediate hosts such as raccoons.

In an ironic attempt at reductio ad absurdum, Farris told the Roanoke Times,

If we don’t have a massive Lyme epidemic, what we have in Loudoun County is a massive mental instability epidemic.

Again, it’s worth repeating that no one is saying that people with chronic pain are making it up, or are crazy. But for them to claim that they somehow know—in the face of all scientific evidence to the contrary—that an already treated and eradicated Lyme infection is what is causing their chronic pain is indeed delusional. It’s not the patients I would say, though, who are suffering from a “massive mental instability epidemic”: it’s irresponsible politicians like Mike Farris and his fellow Republicans on the Loudoun Board of Supervisors.

Let’s hope a bit of sanity returns before the Board approves its “Action Plan”—which is counterproductive, uninformed, and frankly dangerous. This whole episode well demonstrates the perils of politicians (especially politicians who have made a whole career mixing fundamentalist religion with politics) wading into an area that is properly be left to the people who actually know what they’re talking about, who have decades of knowledge and scientific and medical expertise in communicating public health risks to the public and in taking sane and effective measures to protect public health.

PS Where are our local newspapers when it comes to reporting on this? Leesburg Today and even the Washington Post reported on the Loudoun Board’s Lyme action last week as if they were doing nothing more than reprinting a press release. Can’t they pick up a phone and call the CDC, do some reporting and get the real story? It took the Roanoke Times to unearth this story in our own backyard about Michael Farris’s weird crusade on Lyme disease that is behind it all.