It’s easy to blather airily about Cutting Your Taxes when you’re running for office; it’s another matter when you’re actually responsible for things.

Loudoun schools continue to add 3,000 pupils a year, thanks to the pro-rampant-growth policies of previous Republican boards

Even our extremely fiscally conservative highly businesslike new all-GOP board of supervisors seems to have found themselves helplessly facing reality this week.

Despite arbitrarily vowing to cut tax rates 5 percent, the board has discovered —mirabile dictu—the following little facts that stand in the way.

• three-quarters of the Loudoun County budget is for schools

• as a direct result of the unrestrained residential growth policies enacted by previous Republican-controlled boards, which made Loudon the fastest growing county in the Washington area (and indeed in the entire country) for many years, Loudoun’s school enrollment has been growing by 3,000 students a year for the past decade, and is projected to continue to grow by almost the same rate in coming year, roughly a 5 percent annual growth rate

• 78 percent of the school operating costs goes for instruction, only 2 percent for administration

• and despite all of the familiar boilerplate about big-spending liberals coming even from people who certainly ought to know better like the wise men at Loudoun’s local politics blog Too Conservative, the 2007–2011 Democratic controlled board reduced real expenditures per pupil by 20 percent (see graph below) during their four years in charge

Cutting the county’s Urban Horticulture Program, for a savings of a grand total of 0.005 percent of the county budget, or the Drug Court, for a savings of 0.001 percent, may be excellent PR for Fiscal Responsibility, but isn’t exactly going to get the tax rate down by 5 percent.

In fact, unless the board is prepared to start firing teachers and closing schools, there’s simply no way to even remotely accomplish what they so airily promised the hard-oppressed taxpayers of the richest county in the nation.

This week, bowing to an inevitability that even they had to recognize, the board agreed to halve their previously announced budget cuts for the schools, and slightly increase per-pupil expenditures over the level of the last budget approved by those big-spending Democrat budget-busting tax-hiking liberals who preceded them.

Here’s the reality, presented in simple easy to follow pictures that even a Loudoun supervisor might understand . . 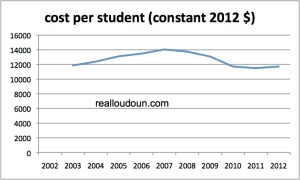