Our leading local political ambulance chaser, “Ken” Reid, the very proud (and, it turns out, very vain, but that’s another story) new Republican supervisor from Leesburg, has been trying very hard to ingratiate himself with the Christian fundamentalist wing of the local GOP. 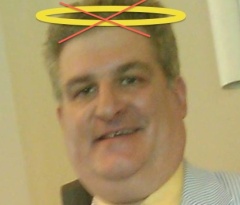 In addition to sprinkling off-key pieties into his official utterances  (“I truly believe we’re doing God’s work”) Reid has been playing to this crowd for some time by modestly extolling himself as “The Jew Who Saved Christmas.”

This self-designation is based on Reid’s efforts while on the Leesburg Town Council to have a Christmas tree put up on public property, and more recently on his small but extremely noisy part in opposing the county policy that opened the courthouse lawn to any citizen group that wants to put up a display—as opposed to the flagrantly unconstitutional endorsement of a single religion that prevailed in the past, when a very tasteful display of the brightly colored Holy Family reigned in solitary splendor each Christmas season on the courthouse grounds.

Ken has gone so far as to allege on his website that his efforts in passing a temporary ban on unattended displays at the courthouse will eliminate “notably, atheist billboards,” an interesting interpretation of a) reality and b) the Constitution. But it is obviously meant to please those local members of the Christian right who have difficulty grasping the idea that not everyone in a democracy shares their religious beliefs, but who also supply hundreds of free and fresh-faced Christian homeschoolers from Patrick Henry “College” to do God’s work in Loudoun each election, God being needless to say a member of the Republican Party.

We know God’s political views here in Loudoun thanks chiefly to the many helpful and detailed statements to this effect written by Patrick Henry’s very own Chancellor Dr. the Rev. Michael P. Farris, esq. (who styles himself “chancellor” on the strength of running his own barely accredited Bible college boasting an enrollment smaller than that of a typical elementary school, and who signs his “scholarly” articles “Dr.” on the basis of his having a law degree).

By the way, Patrick Henry does indeed have a Democratic club, so you can’t accuse the “college” of violating its non-profit status by having all of its students work for Farris’s own Homeschool Legal Defense Association PAC and other Republican political groups. True, the Patrick Henry Democratic club’s Facebook page has two members, and the club disbanded almost as soon as it was founded and has never elected any officers according to the Patrick Henry website, but it still officially exists.

But back to Ken and his earnest efforts to ingratiate himself with Farris & Co.

Here’s a tip: You’re wasting your breath, Ken! As explained by the very helpful statements of faith and Biblical worldview on Patrick Henry’s website, Ken is going to hell anyway:

Satan exists as a personal, malevolent being who acts as tempter and accuser, for whom Hell, the place of eternal punishment, was prepared, where all who die outside of Christ shall be confined in conscious torment for eternity.

And even here on this earth, it turns out that only Christians can truly fulfill God’s plans for transforming civil government, according to the Chancellor Dr.:

Christ’s church has a unique role in society, which only it can fulfill. God requires the church to be salt and light to the world, bringing the message of salvation and discipleship to individuals, and ultimately to nations.

Farris also explains in his statements of faith etc. that God opposes socialism and other forms of government control of private property—and that Christians may overthrow a government that “commands disobedience to God.”

Lest there be any confusion, the Chancellor Dr. has made it clear in his other statements and actions, including his summary dismissal of Patrick Henry faculty members who differed with him over minute doctrinal matters, that by “Christians” he does not mean to include such heresies as those practiced by the Catholic, Greek Orthodox, Unitarian, Coptic, Dutch Reformed, Methodist, Calvinist, Presbyterian, and I think a few other churches.