Welcome back, Eugene . . . all is forgotten (already) 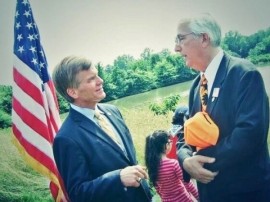 When presented a year ago with evidence that fellow GOP Supervisor Eugene “The Teflon Defendant” Delgaudio (R-Sterling) had violated county policy and probably the law by ordering his county-paid staff to engage in political fundraising, Chairman Scott York (R) tried to hide the evidence for six months, clearly hoping that if he said nothing and did nothing it would just go away.

Now that the special grand jury investigating Delgaudio has issued a highly unusual report concluding that Delgaudio’s action was a “direct violation” (that’s a direct quote from their report, folks) of the county’s code of conduct, York is adopting the same strategy. He has said not a word about it. Last week, a beaming Delgaudio was there alongside York and Governor Bob McDonnell at a ridiculous Loudoun photo-op. All is forgiven! And forgotten!

Just as a reminder . . . last fall, after being publicly shame d into taking some action only after the story broke in the Washington Post, York and the all-GOP Board voted to conduct an investigation to see if Delgaudio violated rules and policies. When the grand jury began a criminal probe a few weeks later, York did a 180, claiming that it would be inappropriate for him to (a) say a word about it or (b) for the Board to conduct its own investigation while the grand jury was doing its work.

So now that the grand jury is done, wouldn’t that free the Board to resume what they were doing last fall before they suspended it?

In fact, the Board doesn’t even need to spend any money on its own probe, since the grand jury did that work for them. The jury found:

1. Delguadio’s abuse of his staff and creating a hostile work environment was a “direct violation” of county policies

2. That Delgaudio unquestionably ordered his staff to engage in political fundraising in the office and at county expense, which the grand jury stated would have been a criminal violation of the law against state officers and employees misusing public assets for personal gain but for the unbelievable legal loophole that it appears not to apply to elected officials (!) since they are not officially “full time” (!). It is unquestionably a violation of the Board’s own policies, however.

3. That Delgaudio so utterly neglected his duties as to order his staff not to spend any time on helping constituents, isolated his staff by ordering them not to attend normal Board staff aide meetings or even have contact with other supervisors’ aides, and reprimanded them if they did try to respond to constituents rather than spend all of their time on illegal fundraising

There, we’ve done your job for you, Chairman York! Now how about an answer?

The grand jury also called for the adoption of an enforceable ethics policy and oversight by a responsible third party of staff aides, who currently are accountable to no one but their supervisor and have no protections either against being ordered to engage in improper or illegal activities. (As we saw in the case of Delgaudio’s aide, the current choices of a staff aide in such a position are 1. File a complaint with HR, and get fired in retaliation; 2. File a complaint with York, who will hide the evidence and never respond; or 3. Take it to the prosecutor, who will conclude that the law against stealing public assets does not apply to county elected officials!)

Citizens in the Sterling district can also add their name to a petition to initiate Delgaudio’s removal from office by the circuit court for misuse of office, neglect of duty, and incompetence: contact  sterlingdeservesbetter@gmail.com for information on how to add your name.

Just don’t expect the see-no-evil hear-no-evil monkeys on the all-GOP Board to do a thing about it themselves.