Always so nice to see our local Loudoun Republicans getting on so well together.

After longtime state delegate Joe May announced two weeks ago that he would seek the GOP nomination for now-open 33rd district state senate seat, the extremely small cabal that rules the Loudoun County Republican Committee with dictatorial efficiency acted within hours to issue new rules changing the party’s planned primary — that is, one of those quaint exercises in democracy where the people get to vote and choose their candidate — and instead announcing they would hold a “mass meeting” tonight to choose their standardbearer.

Having thereby effectively sabotaged May’s candidacy by leaving the choice in the hands of a hundred or so of the far-right wackos who will be permitted to participate, the party faithful wasted no time falling out among themselves. (May meanwhile announced he would run as an independent, spurning the local GOP power play.)

The exciting vote tonight will be between John Whitbeck, local lawyer and shmegegge extraordinaire, who made national and international news for warming up the crowd at a Cuccinelli rally a couple of months ago by telling a really funny joke whose punchline was that the Jews were still trying to collect on the bill for the Last Supper. After indignantly denying that the joke could possibly be anti-Semitic, and saying that the only real issue was George Soros and other (Jewish?) liberals generating “manufactured outrage” over his “lighthearted attempt at humor,” Whitbeck finally apologized days later.

Facing him is 23-year-old television gasbag Ron Meyer, who calls himself a “conservative spokesman,” though to be a “spokesman” usually means that you are speaking on behalf of someone else, whereas he is just blowing his own horn with his boilerplate right-wing blatherings on Fox News. But Meyer obviously has some dough behind him, as he has already run TV ads (on Fox, where else) extolling himself as the only true-blue right-wing wacko in the race and taking a swipe at Whitbeck’s “embarrassing gaffes” that he had to apologize for. 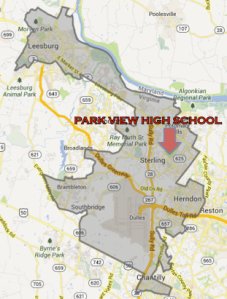 The 33rd senate district and the conveniently selected location of the GOP “mass” meeting where 100 or so people of the far-right wacko persuasion permitted in the door tonight will get to choose between two far-right-wing wacko candidates.

Unlike a primary, where people get to vote any time during the day at a location near their homes, the “mass” meeting is being held at 6:30 pm on a weeknight at a single location. (Located approximately at the left ear hole of the gaping crocodile that is the gerrymandered 33rd district; see map). The dictators who run the LCRC will get to decide who is a real enough Republican to be allowed in the door: they have declared that anyone who has “participated” in a non-GOP nominating process since 2004 is ineligible. Sort of reminds one of the the ideological purges we associate with, oh, I don’t know, how about the Soviet Communist Party under Josef Stalin? Just an example.

(And funny how they chose that cut-off. The LCRC has never laid a finger on their fellow-right-wing-wacko-honchos who bolted the party to the right on occasion, notably Dale Polen Meyers, who lost to Scott York in a primary in 1999 and then broke the signed pledge required of all who voted in that primary to support the chosen candidate in the general election, by running against York as an independent. She turned right around and continued to run the LCRC and its very-developer-friendly network with nary a hiccup.)

Can anyone still pretend that the local GOP is interested in anything but pushing the far-right movement conservatism that the nation as a whole (and even the Republican leadership in Washington) has grown heartily sick of precisely because it puts self-serving partisan advantage over actually running anything in government? Local politics used to be about solving problems. In Loudoun County, for the Republican Party, it has instead become an ideological purity test and ideological battleground where people with national agendas vie to see who can imitate their right-wing TV heroes the best.