Hoping that no one will notice (except the developers—excuse me the “stakeholders”—who stand to benefit the most from it), our all-Republican Loudoun Board of Supervisors returns from its well-earned two-month recess this week with a plan to slip through as its first order of business—without such petty annoyances as debate, discussion, public comment, explanations, etc etc—another of its long promised payoffs to the development industry that installed them in office.

Get ready to be ZORCed

Periodically reviewing government procedures, regulations, and zoning ordinances to see if they need to be improved, updated, or clarified is as American as mom and apple pie. (Or, if you’re the Loudoun County Republican Party, as American as sending out dishonest mailers at election time, violating ethics laws, or wrapping your payoffs to major campaign contributors in the language of religious sanctimony. But I digress.)

But if you give the job of carrying out such a review to a single interest group that is most affected by the rules and which stands to gain the most financially by getting rid of the rules they don’t like, no amount of window dressing in the form of high-sounding words about “efficiency” “reform” and “citizens” can reverse the truth about what’s really going on. END_OF_DOCUMENT_TOKEN_TO_BE_REPLACED

My source deep within the labyrinthine bowels of 1 Harrison Street (“Shallow Throat”) hints that Chairman of the Loudoun Board of Supervisors Scott York may already be finding it difficult to keep his all-Republican very-developer-friendly board in line with the program he was tasked with by the state and national Republican Party. 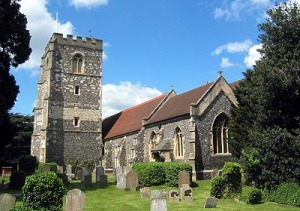 The parish church of Scott York's political mentor, the Vicar of Bray (you can look it up)

END_OF_DOCUMENT_TOKEN_TO_BE_REPLACED

Gutting the comprehensive plan in Loudoun

A source deep within the Loudoun government reports this morning that the new very developer-friendly board of supervisors will soon introduce a motion of Intent to Amend the county zoning ordinance.

We no doubt will have another one of those snappy 9–0 votes to approve with no debate.

This would open up the entire county comprehensive plan document to revision—something that at least some of the GOP candidates swore they would not do during the campaign. END_OF_DOCUMENT_TOKEN_TO_BE_REPLACED