Shawn Williams: Up is down, down is up, and Republicans support the public schools

We’re still marveling over the unbelievable chutzpah that permits Supervisor Shawn Williams (R-Broad Run) to keep asserting (he said it again in his “news[sic]letter” the other day) that the all-Republican Loudoun Board of Supervisors has increased the school budget — when in fact they have repeatedly cut it, and are now looking at handing the schools an $80 million cut for next year.

Just to keep pace with rising enrollment (more than 2,000 new students added to the rolls per year) the school budget needs to grow by 3.5 percent a year. To keep pace with rising enrollment and increased fixed costs (i.e., no new programs, no new bells and whistles, no new nothing — just to prevent a deterioration of the present condition) the budget needs to grow by about 5 percent a year.

Here’s what your all-Republican Supervisors in fact have done the last couple of years, and are planning to do next year — this graph compares enrollment growth to the approved budget our fearless leaders dictated, on an index of 100 for the 2012–13 school year: 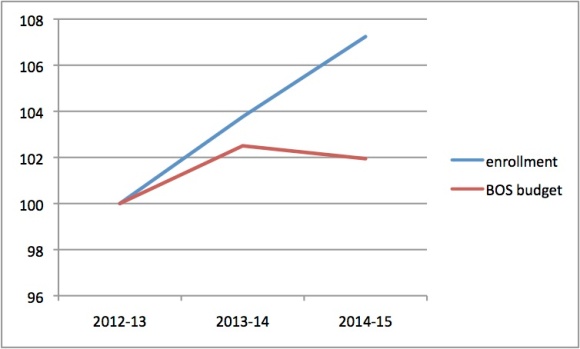 And here is a comparison of the budgets that the schools actually required versus what the Supervisors actually did (and are proposing for 2014–15):

So put that in your pipe and smoke it, Supervisor Williams.

(All of the above data come directly from the Loudoun County Public Schools official budget documents, available to everyone — including a Loudoun Republican Supervisor! — at the school system website.)

There are however some inklings of dissensions among the ranks of our unanimous Board, with at least Supervisor Janet Clarke (R-Blue Ridge) suggesting she is concerned about the Board’s proposed arbitrarily chosen tax rate that would whack $79 million for next year and thinks that at least the Board ought to consider the option of merely whacking $67 million.

How bout this: how bout actually first figuring out what the proper budget for the schools ought to be, then setting the tax rate accordingly? No, this Board sets the tax rate first, choosing completely arbitrary targets of either holding the rate level or cutting it two cents, then announces that the schools just need to live with the number that results.